Hedwig has been seen daily along the backshore, mostly laying low during the day. She has become quite expert in fooling the crows as to her whereabouts. Fog, snow, rain, or sunshine, she isn’t deterred much from her routine of sleeping, resting, and grooming during the day, in preparation for an evening of hunting.

Early this week I watched in amazement as Hedwig swooped down from her perch and flew hundreds of feet directly to the rocks and in between crevasses. She resurfaced with a small mammal in her mouth and ate it very quickly–from the time she flew off her perch until she gave a satisfied lick of her beak could not have taken more than three minutes. I felt very fortunate to have witnessed a glimpse of her hunting prowess, albeit all too brief.

Perhaps the tail is too long for a mouse or rat and too short for a vole, but perhaps not. Small mammal caretaker Erin Whitmore wrote with her suggestion. What do you think Hedwig is eating?

Again, tonight she flew off her perch, this time heading out to sea. In mere minutes she returned with a waterbird of some sort and proceeded to eviscerate, much to the thrill of her Sunday evening fan club. The lighting was low and I was mostly filming, but did manage a few stills.The prey was black and white and as she mostly sat on her catch while eating, it was difficult to determine which species. Without a crow in sight (as they had surely settled for the night), Hedwig ate well into the early evening.

The feathers were flying! Hedwig with feathers on her face but it’s almost too dark to see.

She’s finding the eating here in Gloucester excellent, but with the warm weather predicted for the upcoming week, I wonder if Hedwig will stay or that will be a cue to depart for the Arctic. 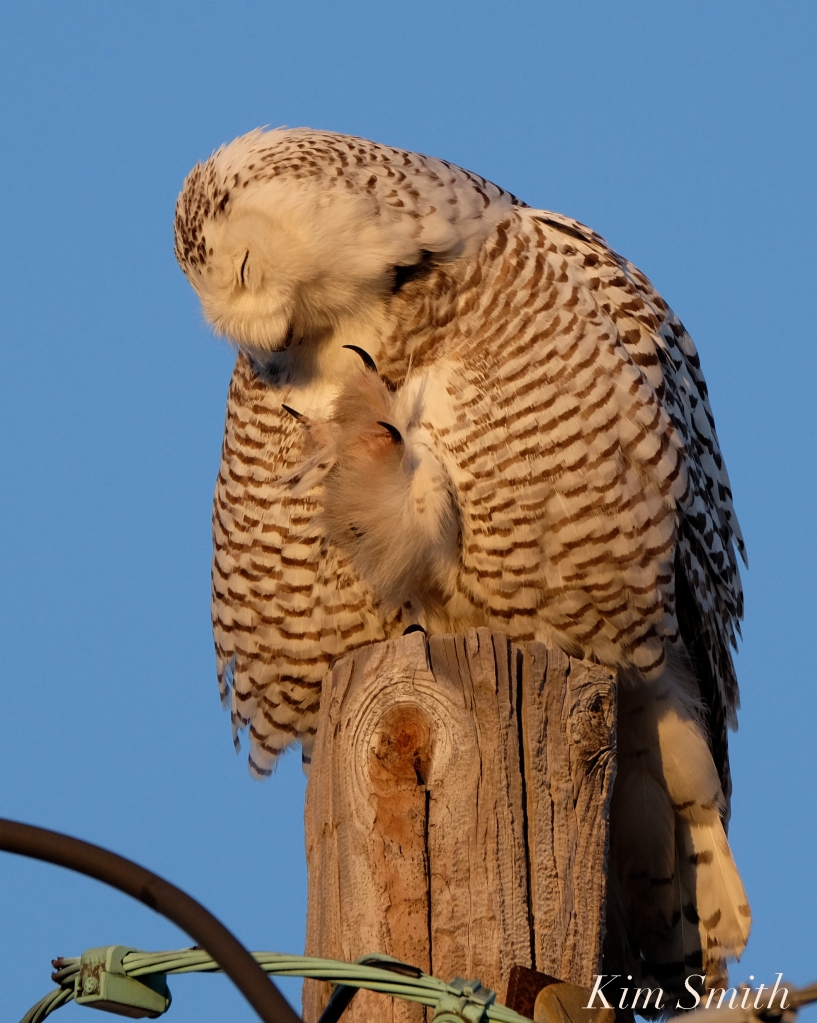 Please don’t get electrocuted Hedwig, as happened recently to a Snowy in southern Massachusetts!