This morning I had the joy to meet Don and Eleanor. Don built the fantastic Osprey platform that you see in the photos. Several years ago, Don noticed that an Osprey pair were trying to construct a nest on a post by the train tracks; the post that houses the all important train signals. Understandably, railroad workers had to destroy the nest as it was interfering with train operations. After watching the Osprey pair attempt to build a nest two years in a row, Don decided to build and install an Osprey platform in the marsh adjacent to his home. With some advice from Greenbelt, Don installed the platform early this spring. Wonder of wonders, his plan worked! The young pair built a perfect nest and one egg hatched.

Thanks to citizen scientists like Don and Eleanor and the Essex County Greenbelt’s amazing Osprey program, the north of Boston region is rapidly being repopulated with Opsrey. Don is already building a second platform with hopes of installing it in the spring of 2017.

Don reports that since the Osprey have been on the scene, they are no longer bothered by pesky crows. He witnessed a pair of crows trying to rob the Osprey nest of its egg. The Osprey swooped in, snatched both crows, and beat them down into the marsh. The crows have yet to return!

Many thanks to Don and Eleanor for their warm hospitality and efforts to help the Osprey.

To take some truly terrific closeups, a longer zoom lens is required than my own 400mm, but we can at least get a glimpse of the Osprey family with these photos.

So many thanks to GMG’s Paul Morrison for the excursion out to photograph the Osprey nest on the Annisquam. And thank you to Paul’s sister Kathy for the suggestion. We were there for only a short time when we began to see movement beneath the adult perched on the nest’s edge. After a few moments, the nestling’s shape became visible, but only for seconds, before it settled back deeper into the nest.

Some interesting facts about Ospreys:

Their population has rebounded following the ban on the pesticide DDT.

This hawk is easy to identify when flying over head as it has a whiter belly than other raptors.

The male gathers the nesting material while the female builds the nest. Osprey return to the same nesting sight and nest, building and rebuilding the nest up over a period of many generations. The man made nesting platforms that we see in Essex County are relatively new nests. Osprey nests that are built up over decades can reach 10 to 13 feet deep and 3-6 feet in diameter, large enough for an adult to sit in.

The osprey’s diet consists almost exclusively of fish, nearly 80 different species of fish are eaten by osprey. Sounds like a Gloucester sort of raptor! 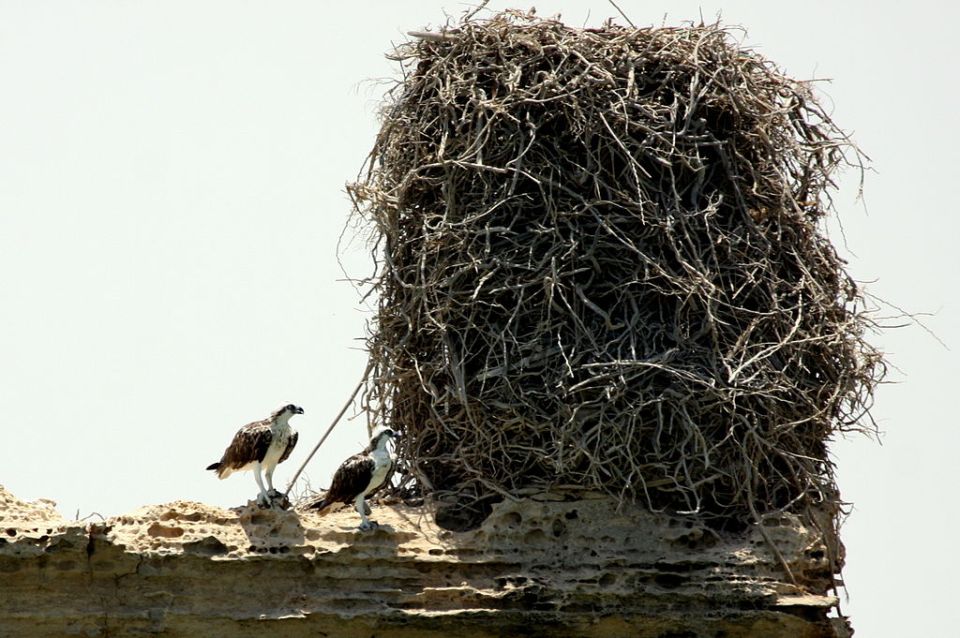 Osprey are found on every continent except Antarctica