PLEASE NOTE THE CHANGE OF MEETING PLACE. THE MEETING WILL BE HELD AT THE FRIEND ROOM AT THE SAWYER FREE LIBRARY.

Animal Advisory Committee Meeting Thursday, August 23rd, at 6:30. This meeting is being held at the Friend Room at the Sawyer Free Library.

Lest anyone has forgotten, a beautiful pair of Piping Plovers tried to establish a nest on Good Harbor Beach during the month of April. Time and time again, they were disrupted by dogs–dogs off leash on on-leash days, dogs running through the nesting area, and bird dogs chasing the birds up and down the shoreline. This was witnessed multiple times during the month of April by the Piping Plover volunteer monitors.

Piping Plovers face many man made problems and natural predators however, the two greatest threats at Good Harbor Beach are dogs and crows. Changing the ordinance on Good Harbor Beach to help the Piping Plovers will at the very least allow them to nest in their natural environment. Our parking lot nesting pair were extremely stressed having to defend both territories, the parking lot nest and their roped off territory. Please let Mayor Sefatia and city councilors know that you support the change in ordinance to restrict dogs on Good Harbor Beach during the month of April.

Thank you for your help!

The following series of photos shows why it is so critically important to not allow dogs on Good Harbor Beach during shorebird nesting season, which begins April 1st on most Massachusetts beaches.

He invites Mom to come inspect his handiwork. 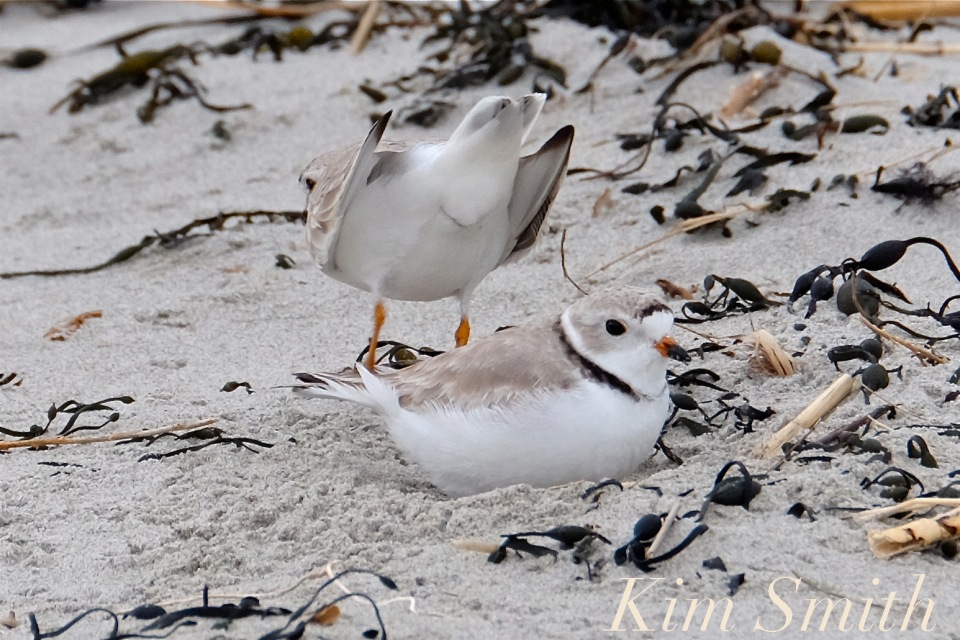 She tries the nest on for size and approves! Mom appears plump and ready to begin laying eggs. 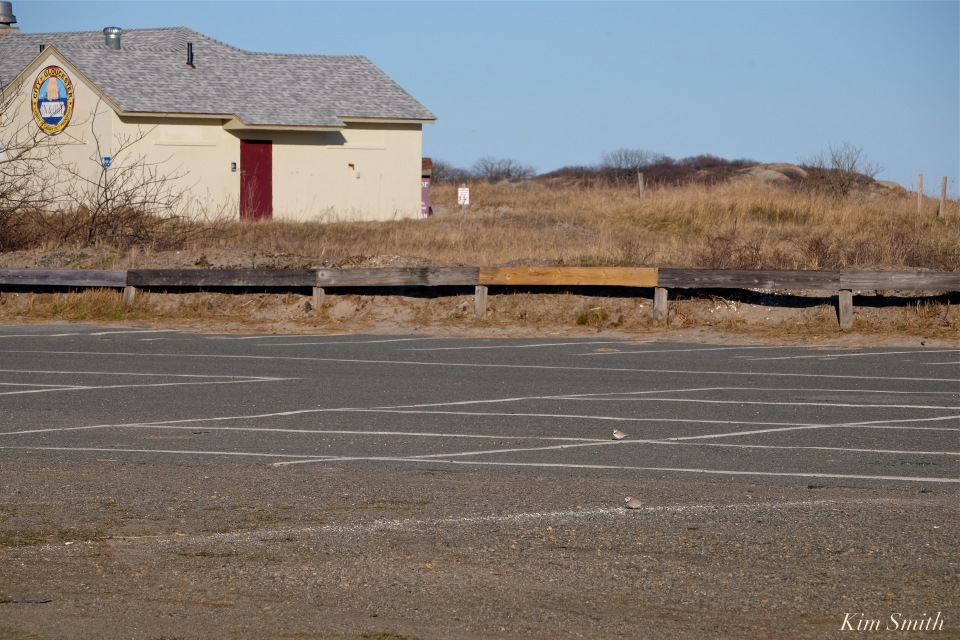 Mid-April and after days of dogs running through the nesting area, the Piping Plovers are discovered standing on the white lines in the GHB parking lot. 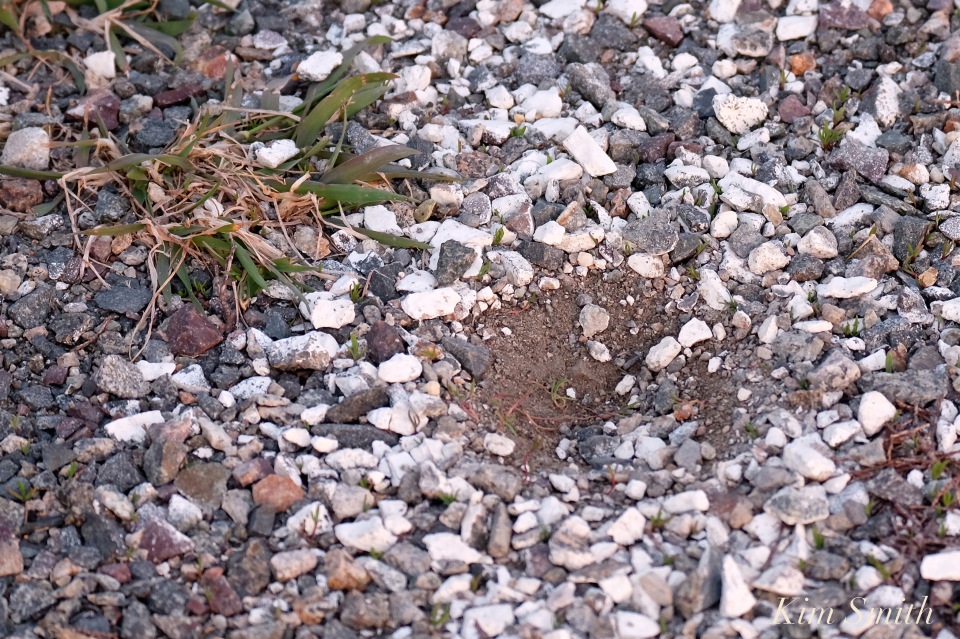 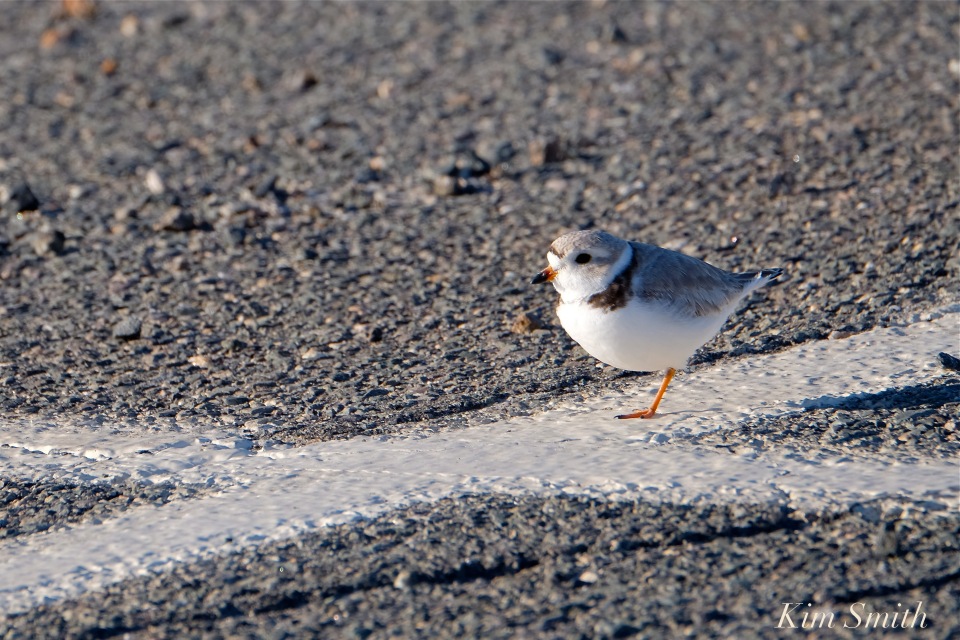 With fewer cars in the lot during the month of April, the PiPl determine the lot is safer than the beach. They give up trying to nest on the beach and concentrate solely on the parking lot nest. 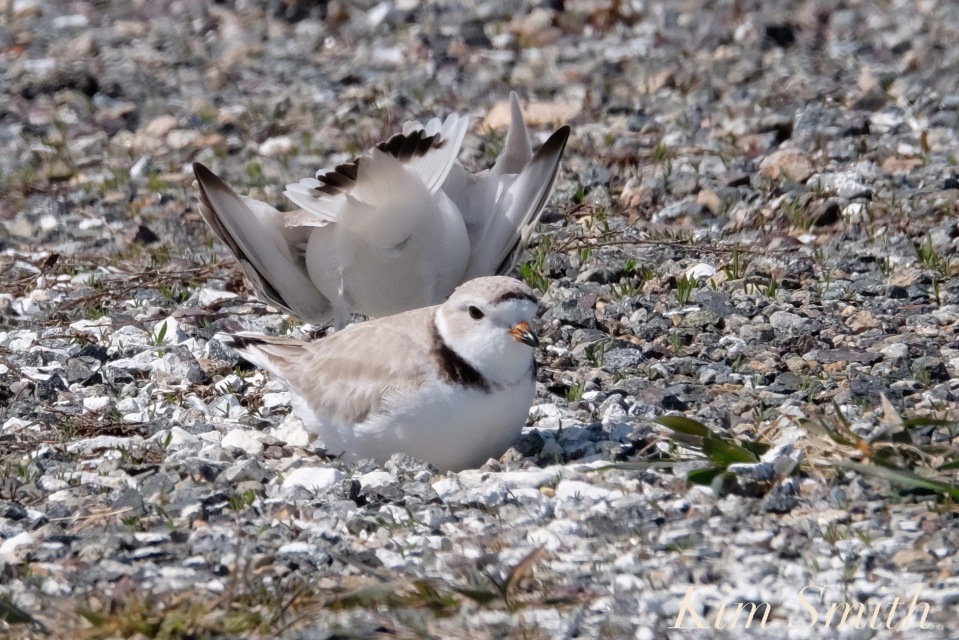 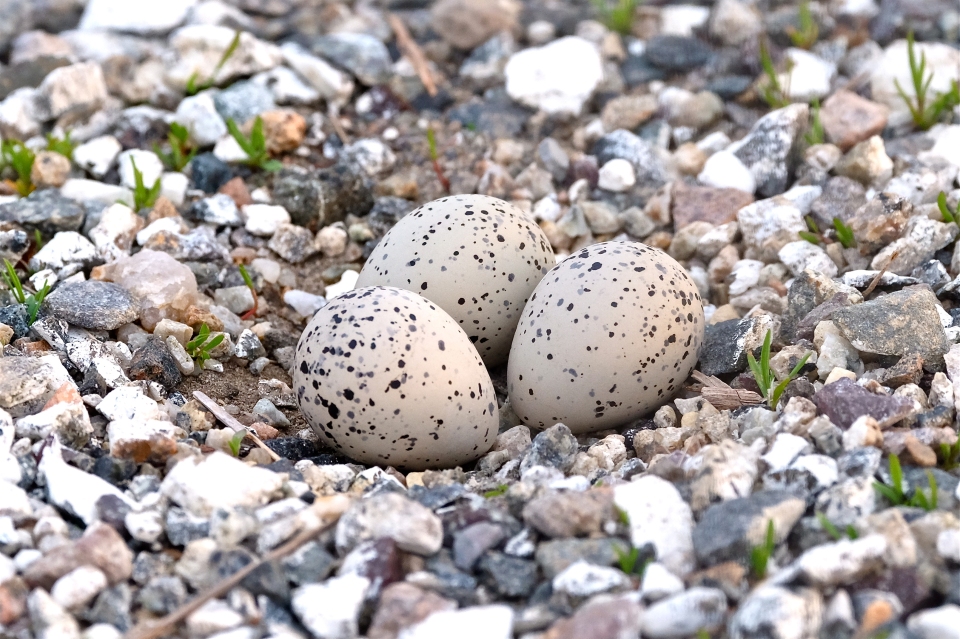 She begins laying eggs in the parking lot (four total).

Photo of Great Blue Herons, because we share the shore with herons, too 🙂

Dogs romping within the clearly posted and cordoned off nesting area in April, forcing the Piping Plovers off the beach and to nest in the parking lot.

This past spring and summer we had a tremendously difficult time with our nesting bird symbolic fencing. The posted and roped off area is referred to as “symbolic” because it is not an actual physical barrier, but a visual warning to let people know to keep themselves and their pets out of the cordoned off area. People often ask, why can’t more permanent fencing be placed around the nesting area? After nearly thirty plus years of working with Piping Plovers, biologists have established that physical fences placed on the shoreline and in the wrack area are all too easily washed away by high tides, create safety issues and, too, you wouldn’t want to trap dogs and predators within a nesting area.

The difficulty with our metal posts is that they were knocked about and pushed down with nearly every high tide, dragging the roping into the sand as well. The rope and posts needed almost daily righting.

The Massachusetts Department of Conservation and Recreation (DCR), which successfully protects Piping Plovers and other endangered birds at dozens of Massachusetts beaches have come up with what appears to be a good fencing solution for areas within tidal zones. DCR uses long, narrow fiberglass rods which can be pushed easily into the sand. The poles are strung with two rungs of roping, and in some places three rungs. I measured the distances between the poles at Revere Beach; they are placed about every twenty to twenty four feet.

In early spring, before the Piping Plovers and Least Terns have nested, historic nesting areas are roped off. After a nesting pair establishes a territory, a second row of poles and roping are added around the perimeter of the nesting area. The fiberglass poles can be adjusted without too much difficulty.

Wooden poles are used to post the nondescript, but informative endangered species signs. According to DCR staff, the only time they have complications with the fencing is when the wooden posts are tied into the fiberglass poles and the tide takes both down.

I don’t understand why the fiberglass poles are less likely to shift in the tide, but they don’t shift and appear to work very well in the tidal zone–perhaps because they are flexible and less rigid. If anyone knows the answer to that, please write. 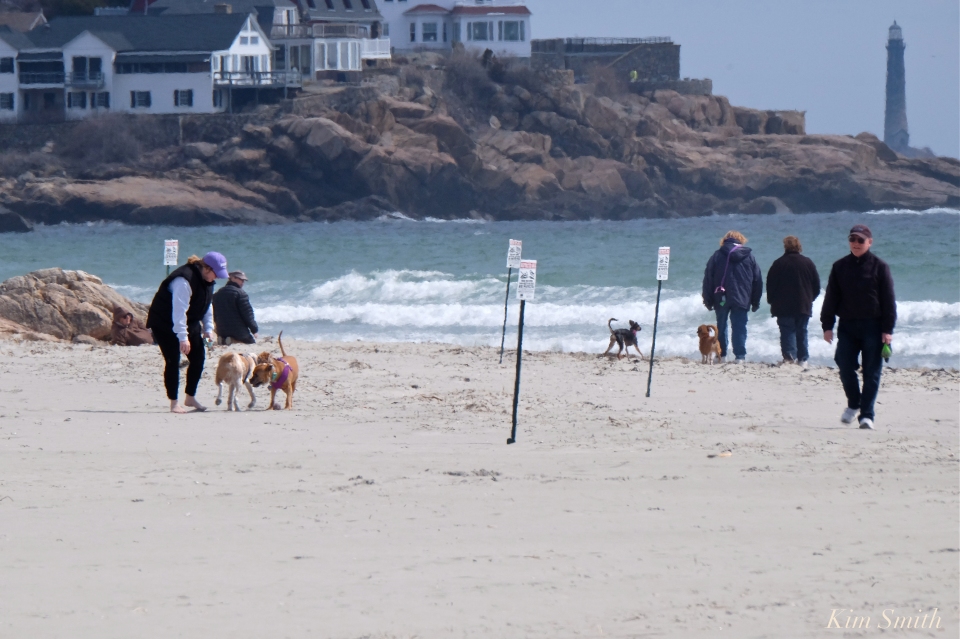 The above photo, taken at Good Harbor Beach in early April, shows why it is so important to have the signs and roping in place by April 1st. People and dogs were playing in the nesting area while the PiPl were trying to nest. The photo below shows that a second, and even a third rung of roping, placed at dog height, may help to keep dogs out of the roped off area.

Examples of symbolic fencing areas at Revere Beach and Nahant Beach. Notice the double row of fencing and the double and triple rungs. 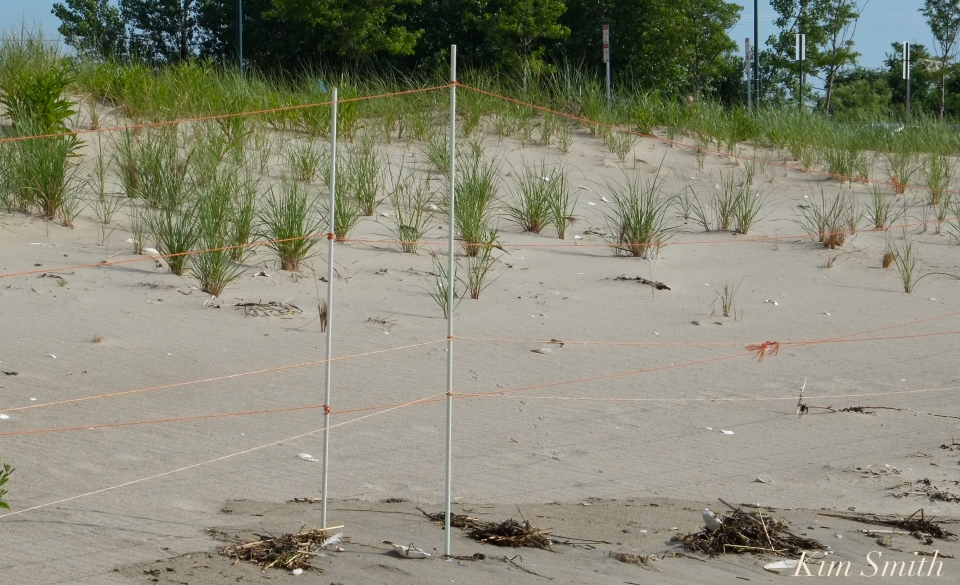 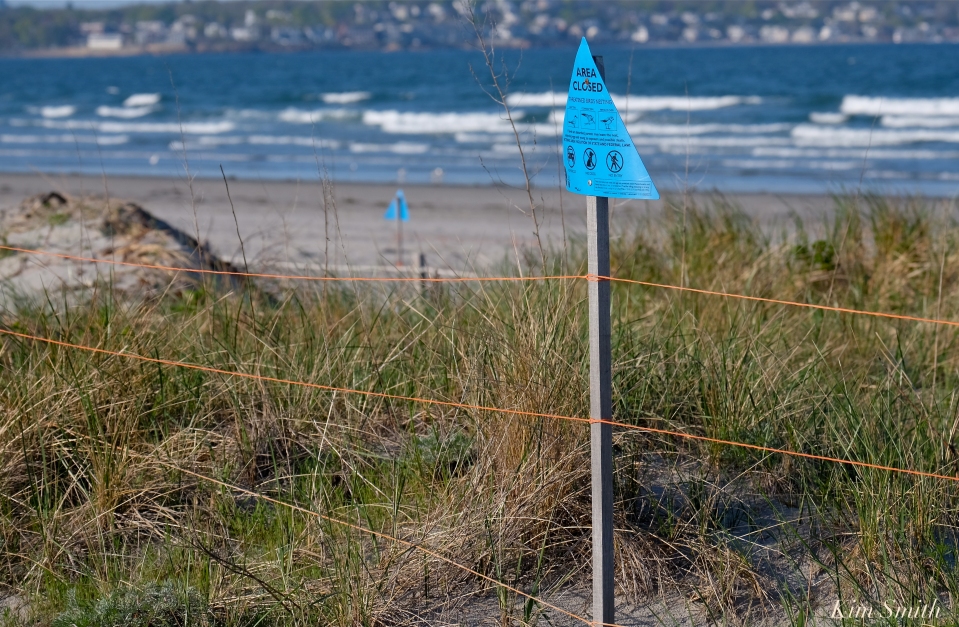 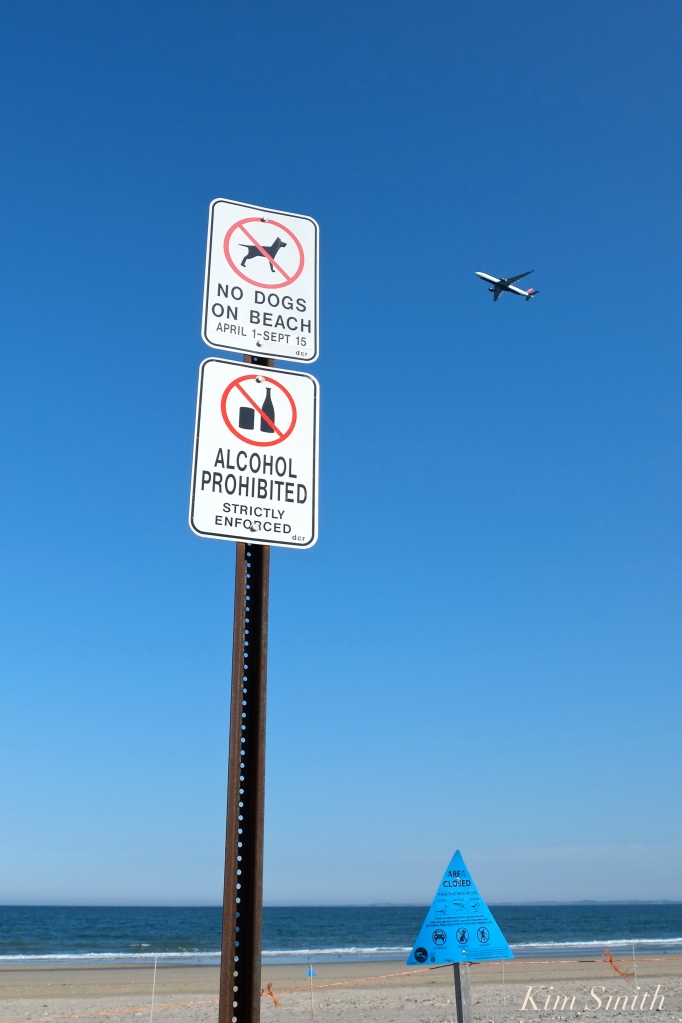 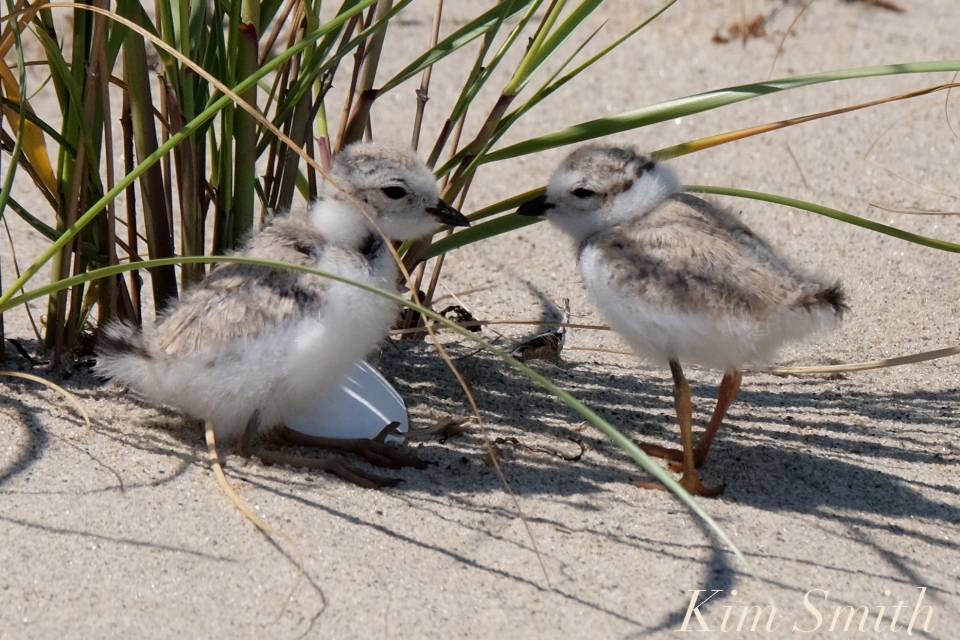 Piping Plover chicks finding shelter in the roped off nesting area on a hot summer day.